During the last months of 2019, Migrant Talent Garden organised communication events in Croatia, Bulgaria, Greece, Latvia, Iceland, Norway and Lithuania to showcase the project`s goals and results so far.

On the 11th of October Latvian “Shelter “Safe House” organized a networking event for 20 young migrants from more than 6 different countries, including India, Syria, Ethiopia, Afghanistan, Turkey, Saint Vincent and the Grenadines. In addition to young migrants, event brought in participants representing different Latvian organizations and institutions. The event served as a platform to discuss and share information about entrepreneurship, possible opportunities, as well as challenges one might face when starting a business.

On October 15th Iceland held their communication event in cooperation with the Icelandic Directorate of Labour. During the event, Sóley Ómarsdóttir, project manager of the Red Cross, introduced the MTG project and the Directorate of Labour held an information session about worker’s rights in Iceland. About 25 migrants and other stakeholders attended the event that was translated into Spanish, Persian, Arabic and Kurdish.

After two weeks, on the 29th of October MTG gathering took place in the capital of Bulgaria Sofia. Representatives of Caritas Sofia and Hemus Technologies (HT) have got together to discuss the MTG project its aims, work done and planned activities during the communication event. As a result, Memorandum of Understanding in order to define the nature and scope of the relationship of the two parties within the frames of the MTG project implementation was signed. Another communication event to present the methodology and research results to a wider public is also planned in the nearest future.

Caritas Norway held their communication event on November 11th in Oslo, Norway. The Course leader and founder of PEL Services Rafael Garavito, as well as other local partners, were invited. The event gathered more than 25 participants who were informed about the project’s progress and our partner organizations.

The Croatian team – ZIP – organized two dissemination events: The first one was held on November 14th in Algebra Lab and tailored to start-up communities and investors. The event announced a new start-up program focused on migrant founders. The second event took place on the 25th of November. Migrant support organizations and business coaches were gathered to familiarize themselves with the project and discuss the possibilities of cooperation. Additionally, ZIP announced a plan to support migrants when starting a company or finding a job. Participants engaged in a discussion regarding the current migrant situation in Croatia. The discussion leads to many concluding that Croatia lacks a large number of migrants and that there is not so much support available from institutions. However, it is expected that there will be changes in the Croatian approach towards migrants due to the increasing number of Croatians leaving Croatia, resulting in a foreseen need for new labour migrants.

On December 3rd Migrant Talent Garden Lithuania organised two group seminars for 20 people. The first one took place at Caritas Foreigners integration center, where MTG presented their research results and methodology. During the info sessions, migrants were able to speak to and hear a success story by an established migrant who owns a restaurant. The second seminar took place at the Kaunas University of Technology. Here lawyers were available to answer questions and share legal advice regarding establishing a business. MTG`s project manager Laura Riaubaitė introduced benefits of participation in the project.

To end the yearly events Greece held their communication event on December 19th. An open-door day was organised to present MTG`s progress and results from the study visit. The topic of volunteerism (LIONS International Club District 117A Greece) was also presented. The presentation was followed by an open discussion about the challenges migrants face when establishing a business in Greece.

Hence the aforementioned info sessions were organised to present the progress of Migrant Talent Garden through informative gatherings. 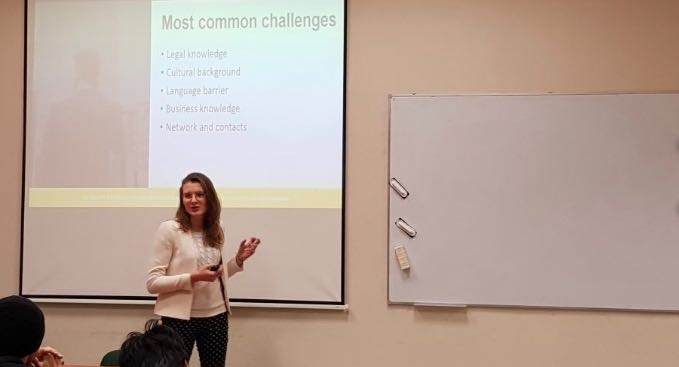